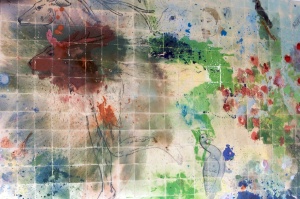 Just one hour drive out from Vienna into Burgenland can one view a remarkable ceramic mural by Edgar Tezak.   Presently installed in the Keramikwerkstätte Stoob this expansive work depicts figures and animals engaged in quasi-psychic communications and metamorphoses on muted grounds with vigorous color bursts.  These themes and motifs have reappeared in Tezak’s work throughout his career from the late 1970s to now.  Though here the figures, naked humans transformed with animals, are scaled larger-than-life-size appearing as archetypal characters in a frozen epic narrative.

In parts, the mural alludes to something of a folklore-ish fairytale and something of a Jungian study of the Hindu Upanishads.  However, there is no linear chronology in the piece.  Moments of a perceived story reflect a contemporary reading and the anticipation of the importance in focusing on still moments.  Thereby Tezak undogmatically confers the possibility of analysis in moment viewing the work.

The detail of the painted line as well as the moments of robust color interact easily while conveying heavy relations involving humans, doves, geese, ravens and deer.  Made up by over 600 square tiles, the form of the mural provides an underlying grid serving as the underpainting.  Painted with splatters, throws and sprays of ceramic glaze alongside thin and broad brush painted lines, and then kiln fired, the tiles depict transformation in their conception as well as their collective account.