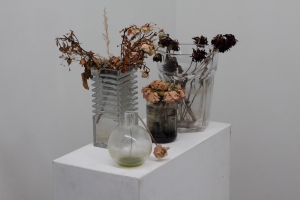 In her installation ‘Thank you for the flowers’ presented at the Ve.Sch in the Dienstag Abend program, Karine Fauchard strongly expands the reach of understandings and the prospects for her work.  This site-specific sculptural installation opens new paths for her work and underscores the recurrent themes of her painting practice.  Particularly, that of a recent body of paintings depicting objects offered for auction by the Collection of Yves Saint Laurent and Pierre Bergé.  Now, like in her paintings Fauchard re-contextualizes still life with cultivated material sensitivity.

In ‘Thank you for the flowers’ Fauchard leaves the white walls of the Ve.Sch’s backroom gallery untouched.  On two white pedestals of different heights and on the floor are installed clear glass vases of assorted sizes and shapes.  Each vase contains flowers that have been left to dry.  Every one is unique referencing possessing some type of an anthology of objects.  Here, Fauchard’s staging of the matter of collection has a different take than other artists.  For instance, Fauchard maintains a divergent interpretation when compared to the recent installation in the Secession by Manfred Pernice.  Hers is not meant to be especially educational or instructional, rather Fauchard highlights the meaning of having a collection by selecting to include each object for the pure form of the work.

Based on the suggestion of the title, the flowers are indications to gifts of cut flower bouquets seemingly once given to the artist.  Also, each glass vase holds a particular ikebana like arrangement of flowers as well as water or a trace of water.  The inclusion of water suggests that each time a bouquet was received, that then the flowers were place into a vessel with water to extend each plants’ life spans.   But now, the plants are dry and dead.  What is left of the bouquets, in their assorted degrees of slow disintegration, presents a view of beauty in the present and reflects that the flowers were enjoyed while the blossoms lived.   Thereby, the flowers were enjoyed alive and were given water to be kept so for a time.  As they were not hung to dry or placed on a drying rack, it makes clear that the production of dried flowers was not the concerned outcome.  Fauchard’s work points to the experience of viewing the plants at all of the stages during their life cycle albeit in a nonclinical fashion.  So it seems, these flowers were enjoyed alive and Fauchard simple chose for the flowers to remain to make the piece.

The individual flowers, a mix of species that certainly includes roses, each transform differently while drying.  Not just the flowers but so too was the water of each vase changed over time. Apart from initially being filled into each vessel the water was, just as the flowers, left untouched.  Resulting that in some vases while the flowers dried the water evaporated.  In other vases the flower stems began to rot before drying thereby turning the water into black sludge or green foam.  Of the vases with colored water, the water sometimes evaporated while in those, especially those having a sealed neck, the water continues to remains.  In these vases, the stems and flowers move along their biological change of decomposition and dehydration leaving trace in the water.  According to Fauchard, some of the bouquets are a year old while others have been included in the piece far more recently.

In sum, Fauchard engages ephemeral sculpture depicting still life achieving meaning.  Appropriating this genre so too are artists like Leslie Vance and Laura Letinsky, but Fauchard selects to leave hardly a trace of her mark allowing chance arrangements ripen.  Confronting the viewer with her real momento mori, Fauchard portrays death, growth, intimacy, nostalgia and aesthetics from a slight patient gesture.