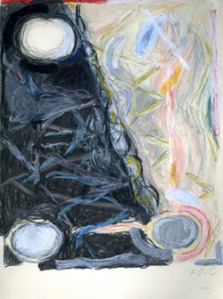 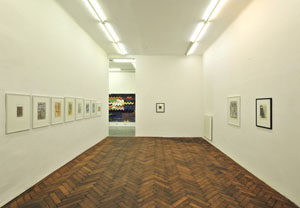 Katherine Porter at Galerie Hubert Winter choicely highlights a sampling of works made during each decade of her continuing career.  Primarily works on paper, the show defines Porter’s remarkable consistency and persistent emphasis on line.  Using a light pencil her signature and date often mark the works spanning the 70s to the present.  Insightful to view Porter’s works from different eras, this selection should by no means be mistaken for a suitable retrospective but just as the gallery show that it is.

In her movement across four decades, Porter shows sustained robust expression.  Apparently that that which began as manic moves ultimately shifted past adolescent release and toward knowingly composed and clarified gestures.  The jagged urgent scribblings that look inseparable in her earlier work become deliberate steps.  In later works, Porter continues to engage wacky compositions but with a premeditation to form.  Then her mastery of gouache, pastel, collage and charcoal reveal the ongoing meaning of her work and redefine the perceived definition of her aesthetics.

For her use of circles, Porter’s works have rightly been compared to the geometric abstractions of Sonja Delaunay.  Likewise there is no question of Porter’s likeness to Mardsen Hartley as well as the influence to younger artists such as Rebecca Morris.

Porter’s accomplishments include twice exhibiting in the Whitney Biennale, New York as well as extensive international gallery exhibitions and inclusion in innumerable collections.  Probably, it is hard for Porter to live down that her name comes from a long ago over marriage to the nephew of Fairfield Porter.  Yet, Porter takes a singular position with her particular a-rhythmic circle and diagonal relationships.  Proving here is that her work fits into the continuum of current perspectives.